Growing up in American evangelical Christianity there were a few things that were a given, one of them was belief in hell as eternal conscious torment. Those who do not believe in Jesus, which does not just include atheists and those of other religions, but those whose belief is not sincere enough, were looking at an endless experience of torture. This was the punishment given by a loving God to those who, for whatever reason, make the wrong choice about what religion to believe.

Most who grow up in such churches eventually become uneasy with such a doctrine. How could a loving God do something that none of us could conceive of doing to our worst enemy? What is loving about endless torture? But we swallow our questions because we do not want to appear to question accepted truth, such questions may indicate our own hellish destination. 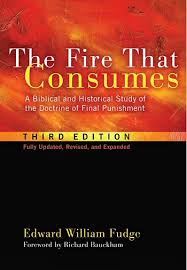 Yet the doctrine of eternal conscious torment has come under question in recent decades. Some adherents to the traditional view say such questions are a result of people who do not believe the Bible, people who have allowed the culture to seduce them. The truth is that when the evidence of scripture is weighed, it is the traditional view of eternal torment that is found wanting. Edward Fudge’s book The Fire that Consumes is one of the most detailed and comprehensive studies of scripture on the subject of hell. He looks at the subject in all of scripture and finds that the Bible teaches the destruction of the wicked. This destruction is just that: death, destruction, perishing. It is not a “destruction” that leaves one endlessly alive and in pain. To be clear, this is not an elimination of hell.  The argument between the traditional view and the annihilation view is not whether there is a hell, it is whether hell lasts forever as conscious torment OR whether hell ends in the destruction of the wicked.  The only way to get to the traditional view is to take the 1-2 verses that might support it, allow them to dictate our reading of the rest of scripture and add in a dose of Platonic philosophy (which gives us a soul inherently immortal).

Fudge goes even farther by giving a brief tour of church history, showing how the traditional view began, won the day and became the view of the majority of Christians. He also shows the many, and growing, instances of Christians who question this traditional view, not out of some wishy-washy desire to appease culture, but out of a desire to truly and fairly represent the Biblical teaching of who God is.

This is a must read for any and all who desire to know what the Bible teaches on hell. Though I should note, Fudge has recently released a shorter book (Hell: A Final Word) that may be easier to read.

View all posts by davehershey

6 thoughts on “The Fire that Consumes by Edward Fudge (Review)”