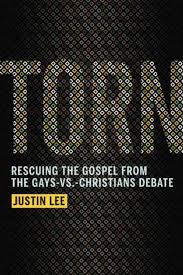 Justin Lee was called “God-boy” by the kids in school. Everyone knew him as a Jesus-fanatic, an outspoken member of the evangelical Christian community. Yet Justin had a secret: he was attracted to men. The problem was that his Southern Baptist background considered being gay a sin, or more precisely a disease to be cured of. In his book Torn,  Justin tells his story and it is an important story to hear.

As I read, I could not help but recall being an adolescent, traveling through those confusing days of middle school and high school, trying to figure out your identity. What if Justin’s secret had been mine? What if I was attracted to other guys, not through any choice of my own, but instead because I just was? How many other kids are out there like Justin – scared, feeling like they have nowhere to turn, moving towards hopelessness?

Justin spends a lot of time talking about his encounters with “ex-gay ministries”. What he writes about such ministries is revealing. He discovered that the success stories in these ministries were not really success; the men were still attracted to men, they had just made the choice to be marry women. Justin saw first-hand how often such choices ended up damaging the families of these men, as their attractions to the same sex never went away.

Justin also spends a lot of time on the question of what makes people gay. As he came out to more people, and as he did more research, he found that the reasons given by Christians for why people are gay did not apply to him. Justin had never been abused, he had a wonderful relationship with his parents, overall he had a great upbringing. Nothing happened in his life to make him choose to be gay, he simply has always been attracted to men.

Overall, this is a well-written, thoughtful, grace-filled and challenging book. It could ruffle feathers, for Justin is still “God-boy” – an evangelical Christian strongly committed to Jesus Christ. Yet he concludes that being gay is no sin and he is open to a monogamous relationship if the right person comes along. I think whether you agree or disagree with Justin’s conclusions, you ought to give him a hearing because you can’t “disagree” with someone’s life story. Too many Christians approach issues like this as, well, as issues. It is forgotten that these “issues” are about real people with hopes and dreams, fears and flaws. Maybe if we begin to approach others as people to love and not just problems to solve we’ll be a little closer to the dream of Jesus.

If you’re interested, check out the organization Justin started, The Gay Christian Network.

View all posts by davehershey